What’s the Difference Between Antiperspirant and Deodorant? 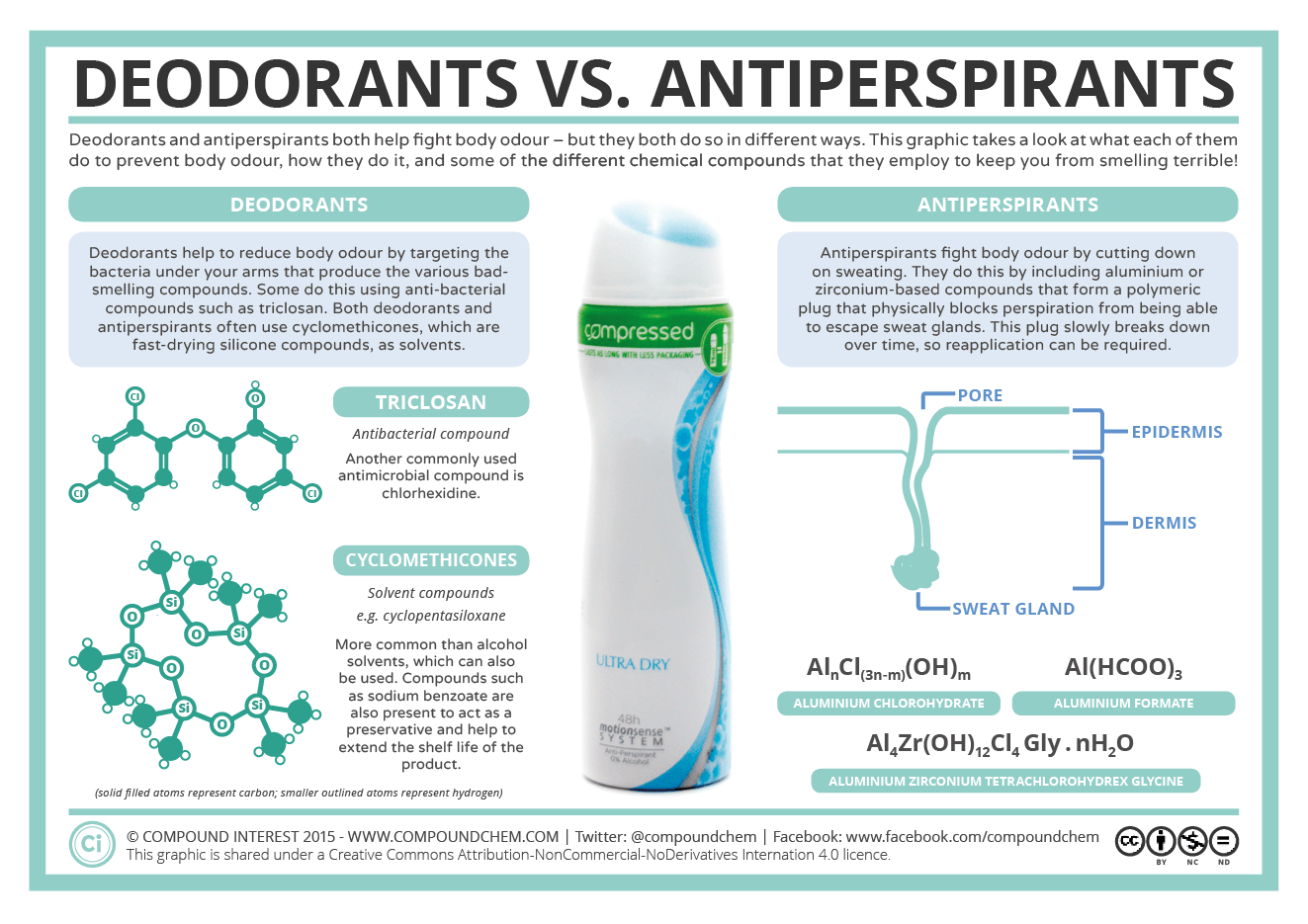 Deodorant just has chemicals in it that make you smell good.

Some deodorants include an antiperspirant and some don’t.

Deodorants and antiperspirants are products that the majority of us make use of everyday. The two terms aren’t interchangeable, however; there is a difference in the manner in which they act to reduce body odour. Today’s graphic is a collaboration with ACS Reactions looking at the chemical compounds that allow each to do their job;  then read on below for a more detailed look at some of the health discussions surrounding the chemical entities found in these products.

The primary difference between deodorants and antiperspirants is the manner in which they reduce body odour. Body odour itself is the consequence of the bacteria living in our underarms, who produce a range of compounds likened variously to the smells of onion, cumin, and goat (yes, goat). Deodorants tackle the odour by targeting the bacteria. To do this, they contain antibacterial compounds, such as triclosan and chlorhexidine.

Triclosan, in particular, is a compound that’s come under scrutiny in recent years. The FDA don’t class it as a compound that’s hazardous to humans, but they also note that a number of studies have been published since their last review of the ingredient that warrant further attention. Some animal studies have suggested that triclosan could alter hormone regulation, though results in animal studies don’t always guarantee the same results will be seen in humans. Additionally, there are concerns that the use of triclosan could contribute to bacterial resistance to antibiotics.

As a result of these concerns, the FDA is currently conducting an ongoing review of its use, though its concerns aren’t so great that it’s ruling out the use of triclosan all together. A number of deodorants don’t actually use triclosan, using other antibacterial ingredients such as chlorhexidine instead, so if you’re concerned about using triclosan, it’s easy enough to switch to using another product that doesn’t contain it.

The solvent in both deodorants and antiperspirants is often cyclomethicone-based; these are cyclic, silicon-containing molecules, which are used because they evaporate very quickly and easily. This allows them to carry the deodorant or antiperspirant ingredients onto the skin, but then evaporate, preventing the skin from remaining ‘tacky’ afterwards. Alcohols were commonly used as solvents before the advent of cyclomethicones (and in some cases still are), but were slow to dry, and could also irritate the skin.

Cyclomethicones, too, have come under scrutiny, but not for human health effects. The concern in this case is their potential bioaccumulation in the environment. It does not break down particularly quickly in water, and it has also yet to be fully established whether the compound poses a long term toxicity risk to fish and other aquatic organisms. More research is underway to try to establish this.

Antiperspirants, unlike deodorants, don’t do anything to act on the bacteria that produce smelly sweat compounds. Instead, they contain chemical compounds whose goal it is to prevent you from perspiring at all. These compounds are always either aluminium or zirconium-based; aluminium chlorohydrate is one of the most commonly used, but a number of others can also be employed. They function by forming a polymeric plug, which physically blocks perspiration from exiting the sweat glands. Over time, this plug slowly breaks down, which is why the effect of antiperspirants isn’t permanent, and they have to be re-applied.

The aluminium compounds aren’t without controversy either; they have spawned a number of sensationalist articles claiming links with breast cancer and Alzheimer’s disease. As always, it’s a case of needing to look beyond the sensationalism and scrutinise the science behind these claims to evaluate whether we should really be worried.

Firstly, let’s look at the links with cancer. These claims seem to stem from a study that examined the concentration of aluminium in the breast tissue of breast cancer sufferers. The study looked at 17 breast cancer sufferers; they noted that aluminium levels were significantly raised in areas of the breast nearer the skin. However, they didn’t compare these levels to other areas in the body, nor to breast tissue in people not suffering from breast cancer. There was no comparison to what constitutes safe levels of aluminium within the body, and there’s also some fantastic use speculative language (lots of use of the word ‘potentially’) in their conclusion, where they link the aluminium levels to antiperspirants. At best, their study shows correlation, and doesn’t provide any evidence for a causative relationship.

Other studies make it clear that a causative link between antiperspirant use and breast cancer is unlikely. Once such study looks at the amount of aluminium that’s actually absorbed from antiperspirants through the skin, and comes to the conclusion that it’s only 0.012% of the aluminium present in the product. To put this into perspective, that works out as about 0.000004g per use using ball park figures. You’re absorbing more aluminium from your food in the amount of time as it takes you to spray on some antiperspirant.

Moving on, and there have also been suggestions in some quarters that aluminium could be partly responsible for the development of Alzheimer’s disease. Research several decades ago showed that rabbits exposed to aluminium developed ‘tangles’ in their nerve cells, which somewhat resembled those seen in Alzheimer’s disease. However, their structure and composition differed, and since then a large number of studies have failed to find any association between aluminium and the disease. Another study found no association between antiperspirant use and development of Alzheimer’s. Due to our lack of understanding of the disease, we can’t completely rule out some role for aluminium, but we can say that the balance of evidence makes it look extraordinarily unlikely.

In conclusion, although antiperspirants and deodorants seem to have had a disproportionate number of negative health claims leveled at them, these claims are for the most part unfounded. There’s little reason to be concerned about using these products everyday – though if you’re still worried, it’s easy enough to find deodorants that don’t contain the compounds detailed here.

Antiperspirant deodorant
« About M Plus Corporation Co., Ltd.
Hyperhidrosis is … »